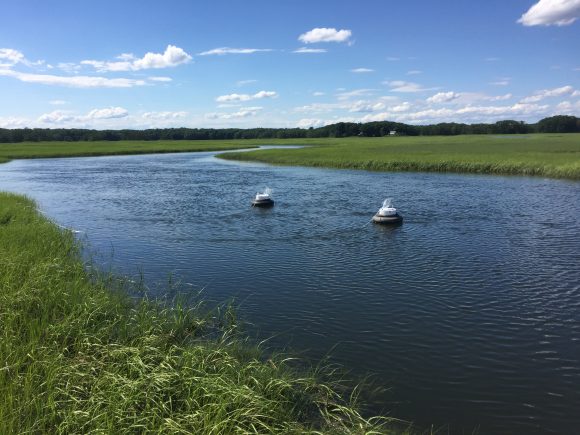 We’ve put effort into understanding the verical marsh-atmosphere exchange of CO2 (through both chamber measurements and eddy covariance towers), and the later exchange of carbon through the import/export measurements, but we wanted to evaluate the vertical exchange of C between the aquatic system and the atmosphere. Mikala’s project this summer was to measure CO2 (and CH4 and N2O) exchange in tidal creeks, mosquito ditches, and permanently flooded ponds on the marsh. We built floating chambers that Mikala deployed in each of these environments to allow her to measure gas exchange. 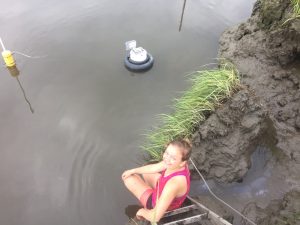 On the first deployment, Mikala attempted to allow chambers to float upstream on the incoming tide.  We deployed GPS units on the chambers, in hopes of tracking their path.  Unfortunately, the chambers kept getting hung up on the creekbank. 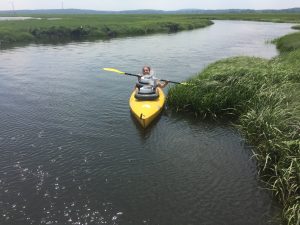 Mikala had to rescue her chambers via kayak, since they didn’t float back to the deployment point.

We then decided to anchor the chambers in the tidal creek, and measure CO2, CH4, and N2O flux on both the incoming flood tide and an outgoing ebb tide. 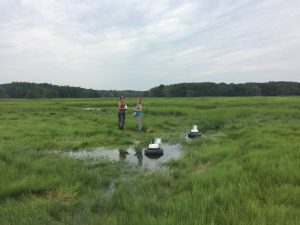 Mikala also deployed her chambers in mosquito ditches (shown here near high tide) and permanently flooded ponds on the marsh.